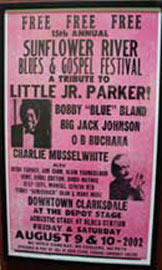 Headlining this years festival are Charlie Musselwhite and Bobby "Blue" Bland. Other performances include Big Jack Johnson, O B Buchana and many more.

The Gospel Stage in the Clarksdale Civic Auditorium will feature The Jackson Southernaires.

We would love to hear from you and share the great times you have had at the Sunflower River Blues & Gospel Festival. Please email any comments and photos you would like to share with us to sunflower@deltabluesmuseum.org

Dear Delta Blues Museum Festival organizers, Your current website requests memories of past Sunflower Festivals. Mine is from 2002.

My husband and I really enjoyed our time at the Sunflower Blues Festival in 2002. We must have gotten to Clarksdale late Friday morning. With our travel pals, we visited the Delta Blues Museum. I still remember the Muddy Waters exhibit. I believe there was a reconstruction of Mr. Waters's cabin. There was also a very evocative black and white photograph exhibit on display. After our museum tour, we visited the gift shop, which was interesting. We inquired about the best place to eat lunch. Morgan Freeman's Ground Zero, right across the street, was highly recommended. We were not disappointed with either the food or the atmosphere. In fact, we still have the photograph in our living room- a gift from our buddies- of the four of us seated for lunch at Groud Zero. A few years later, we were thrilled to watch the TV documentary on Blues Divas taped in Ground Zero.

After lunch, we strolled down the street to take a look at Madidi's. It had just opened that year. On our way back to the Museum, we stopped off at a new store with the words "cat" and "head" in it. By this time we were surprised to note that we were the only people outside. We came to our senses and headed back to the museum. In the heat, I even gave up my hope of locating the homestead of W. C. Handy.

Back at the museum, the highlight of our day was awaiting. Dick Lourie, poet and rock'n musician, was chatting in the cooled auditorium filled with folding chairs with an elderly gent named Mr. Billington. Mr. Billington had on a suit and tie. Dick had just gotten in from Boston with his wife and saxophone.

As the afternoon progressed, Mr. B told stories and played his guitar for the scant audience. He was very entertaining. Dick read some of his poetry and serenaded us with his sax. I was thrilled to hear that one of his poems was recited at the ending of one of my favorite movies, "Smoke Signals".

But the best was yet to come. During Mr. B's ongoing narrative, some young teenagers and pre-teens, boys and girls, came casually into the room, one at a time. Mr. B nodded kindly to each child. By the time they had assembled, they had formed an ensemble that accompanied Mr. B. on his blues guitar. They played drums, guitar, piano. It was a gift to see the rapport that existed between him and the kids. He'd worked with these kids through the years.

By this time, the musicians on the outside soundstage were tuning up for the late-afternoon concert. The escalating sounds of music and gathering crowds let us on the inside know it was time for the lovely interlude with our diverse hosts for the afternoon was about to end. While the entertainment going into the evening was fine, I still recall, after ten years, that wonderful afternoon spent with a poet/rock'n'roller and an elderly gentleman and his young friends. Heading back to Tunica that evening, we had a great time sharing our impressions with our friends.

Thanks, Delta Blues Museum, for the memories!
Marian Dornell