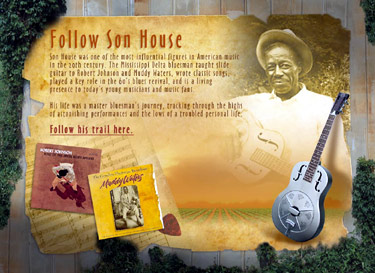 Today, the Delta Blues Museum honors - on the 24th anniversary of his death - the legendary Son House, one of the most influential figures in American music in the 20th century. Born two miles outside of Clarksdale, Mississippi, Son taught himself to play guitar in his twenties; after time served at Parchman Farm, he began to play music around the Mississippi Delta with the likes of, Charley Patton, Willie Brown and ultimately taught Robert Johnson how to play slide. Son recorded with Alan Lomax and then faded from public view, only to be rediscovered while living in New York in the 1960s by photographer and blues historian Dick Waterman. Waterman eventually became the bluesman's manager, and today, Son House's legend lives on through the artists who help keep his music alive - Jack White, Bonnie Raitt and John Mooney, to name just a few. Only at the Delta Blues Museum can visitors "Explore & Learn" more about Son House's musical journey through an interactive educational feature available online, and guests can experience the lives and music of other Blues legends like Muddy Waters, John Lee Hooker and more at the Delta Blues Museum in Clarksdale, Mississippi - the Land Where Blues Began.