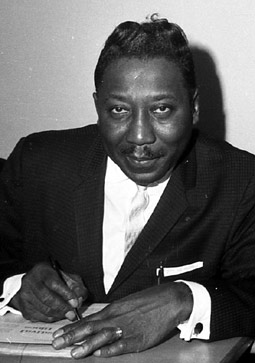 To celebrate his April 4th birthday and a month of events dedicated to his legacy, the Delta Blues Museum proudly pays tribute to McKinley Morganfield - better known as the legendary Muddy Waters. One of the most powerful forces behind American music, Muddy was born in the Delta near Rolling Fork, Mississippi, and later moved to Clarksdale, where he worked and lived on Stovall Plantation. The son of a talented bluesman, Muddy taught himself to play bottleneck slide guitar as a teen; a chance recording with Alan Lomax inspired Muddy to become a full-time musician.

Playing with Son Sims around the Mississippi Delta, in Memphis and in St. Louis, Muddy eventually found his musical home in Chicago, where he signed with Chess Records and changed the game by electrifying the blues. He scored 15 hits in the 1950s alone, effectively creating the sound known as "Chicago blues," a sound that immediately resonated with aspiring young musicians like Paul Butterfield and Johnny Winter. Muddy took his amplified sound overseas to Europe, where his musical shockwaves started a revolution that continues today, through the artists he influenced-most notably Eric Clapton, Jimmy Page and The Rolling Stones, who took their name from a Muddy Waters song.