In time for his May 1st birthday and continuing our celebration of what would have been John Lee Hooker's centennial year, the Delta Blues Museum pays tribute to Rock and Roll Hall of Fame harmonica legend Little Walter. 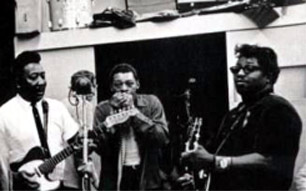 Born in Louisiana, Walter began busking the streets of the Mississippi Delta at the age of 12, finding his own unique style and sound while playing with the likes of Honeyboy Edwards and other older blues musicians. He arrived in Chicago in 1945 and electrified his sound, which landed him a place in Muddy Waters' band and on the Chess Records roster.

He later created his own band, The Aces, and worked with Junior Wells. His European tours took his sound around the world, and his influence lives on today in artists like Charlie Musselwhite and Kim Wilson, among others. When asked which harp player he liked most, John Lee Hooker said, "Little Walter. I like his style. He brought harp up to date. He could make it sound like a saxophone or do anything he wanted to do with it. Everybody tryin' to be like Little Walter."

Learn more about the lives and music of Blues legends like John Lee Hooker, Muddy Waters and more at the Delta Blues Museum in Clarksdale, Mississippi - The Land Where Blues Began.