In remembering him on his February 23rd birthday and continuing our celebration of what would have been John Lee Hooker's centennial year, the Delta Blues Museum honors the legendary bluesman Johnny Winter. 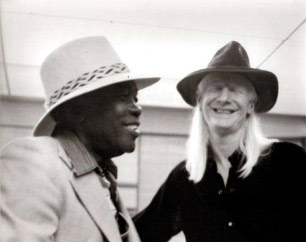 Born in Mississippi but raised in Beaumont, Texas, the Blues Foundation Hall of Fame member gained much of his fame as a guitarist with a style inspired by Chet Atkins and the sounds of B.B. King, Bobby Bland and Winter's musical hero, the mighty Click here.

After carving out his own musical career, Winter became a producer for Waters - reproducing the sound and atmosphere of vintage Chess Records recordings - and the Partnership produced three Grammys for Waters and an additional award for Winter.

Later, he collaborated with another of his blues idols, the great John Lee Hooker, on the album, "Mr. Lucky". Winter's own music lives on, and in the artist's own words, "I think the blues will always be around. People need it."

Learn more about the lives and music of Blues legends like John Lee Hooker, Muddy Waters and more at the Delta Blues Museum in Clarksdale, Mississippi - the Land Where Blues Began.