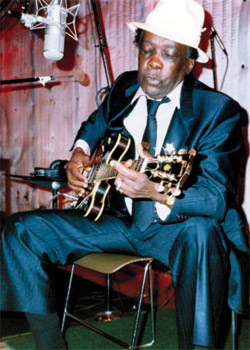 To celebrate his August 22nd birthday and a month of events dedicated to his legacy, the Delta Blues Museum proudly hails "The King of the Boogie" - the one, the only and Clarksdale's own, John Lee Hooker.

Born to a sharecropping family in 1917, John Lee's musical career began when his stepfather-a blues musician, himself-taught his young stepson to play guitar. In the early 1940s and by way of Memphis and Cincinnati, John Lee found himself working by day as an auto factory janitor in Detroit, playing at night for house parties that eventually drew fans from all over. One of those fans, local record store owner Elmer Barbee, introduced John Lee to producer Bernard Besman, and John Lee's recording career was born.

His hits began with "Boogie Chillen", a number one jukebox hit that sold over a million copies in 1949, and continued with "I'm In The Mood", "Crawling Kingsnake", "Hobo Blues", leading up to his signature hit, "Boom Boom" as well as "Dimples" and beyond. John Lee's music influenced major rock-and-roll acts in the 1960s like The Yardbirds, Van Morrison and the Rolling Stones, and his iconic appearance in the film, "The Blues Brothers" reintroduced his music to an entirely new generation. Through the years, John Lee never stopped performing, releasing the biggest album of his career, the Grammy Award-winning recording "The Healer", at the age of 72.