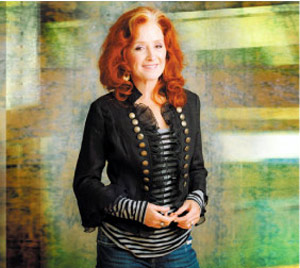 Nine-time Grammy winner, acclaimed singer-songwriter, first-rate bottleneck slide guitarist and longtime Delta Blues Museum supporter Bonnie Raitt found her musical identity in the Blues the minute she discovered the album "Blues at Newport" in 1963 at the age of 14. But when she left college to pursue music full-time, she would unexpectedly and forever be connected to Coahoma County, Mississippi, and to the Delta Blues: Raitt began opening shows in her early 20s for surviving Blues legends during the 1960s revival period, like John Lee Hooker, Son House and Muddy Waters. "I'm certain that it was an incredible gift for me to not only be friends with some of the greatest blues people who've ever lived, but to learn how they played, how they sang, how they lived their lives, ran their marriages, and talked to their kids," she says. "I was especially lucky as so many of them are no longer with us."

A keeper of the flame, Raitt returns to her musical roots when she performs this weekend at the King Biscuit Blues Festival in nearby Helena, Arkansas. Learn more about the artists who inspired Bonnie Raitt and experience the lives and music of Son House, Muddy Waters, Robert Johnson and more at the Delta Blues Museum in Clarksdale, Mississippi-the Land Where Blues Began.