DELTA BLUES Save the Date

Free and open to the public

CLARKSDALE, MS (August 2, 2012) - The Delta Blues Museum will offer a full calendar of free events for this year's 25th Annual Sunflower Blues & Gospel Festival. While museum admission fees will apply during regular hours, a variety of activities held after-hours are free and open to the public.

5:30 pm - "True Delta" Screening at Delta Cinema, 11 Third Street, followed by panel discussion of "State of the Blues," moderated by Living Blues magazine co-founder Jim O'Neal. "True Delta" is a cinematic snapshot of the blues tradition in and around Clarksdale.

1:00 pm - Panel discussion: "25 Years of the Sunflower River Blues & Gospel Festival," in the museum classroom. The panel will be moderated by Mississippi Blues Trail Historian Jim O'Neal, festival co-founder, and features Patty Johnson, festival co-founder; Catherine Clark, festival treasurer and volunteer since the beginning; and Melville Tillis, who co-founded the Gospel Festival with the late James Julius Guy. This is the inaugural program in the museum's "From theArchive" series and is financially assisted by the National Endowment for the Humanities through the Mississippi Humanities Council. It is also generously made possible by the Mississippi Arts Commission, Micheal Loyd Young and the Friends of the DBM. 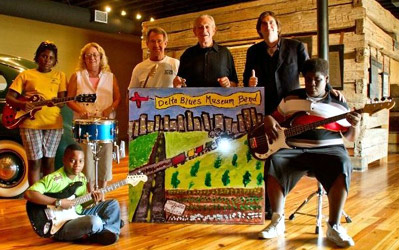 Established in 1979 by the Carnegie Public Library Board of Trustees and re-organized as a stand-alone museum in 1999, the Delta Blues Museum is Mississippi's oldest music museum and the nation's first museum dedicated to the American art form known as the Blues. A 2013 recipient of the IMLS National Medal for Museum and Library Services - the nation's highest honor for museum and library service to the community - and a 2014 winner of the National Arts & Humanities Youth Program Award, the Delta Blues Museum is dedicated to creating a welcoming place where visitors find meaning, value and perspective by exploring the history and heritage of the unique American musical art form, the Blues. The Museum is honored to be a Great River Road Interpretive Center.