The Museum's award-winning Arts and Education Program is the focus of the film, created by the True Delta Project.

[Clarksdale, Mississippi - July 09, 2015] - The Delta Blues Museum Band is featured in a documentary film making its debut on Mississippi Public Broadcasting (MPB) television on July 14th at 10 p.m. Leadership support From the Crossroads to the White House documentary follows a group of young musicians on their journey from the Mississippi Delta to the White House to receive a National Arts and Humanities Youth Program Award presented by First Lady Michelle Obama. Five members of the Delta Blues Museum Band performed for Mrs. Obama and guests.

Last year, the Delta Blues Museum--Mississippi's first music museum dedicated to the Blues--was recognized with the award for having one of the best youth programs in the nation.The Museum's Arts and Education program helps preserve the blues tradition by teaching young Mississippians to play and sing the blues. The program, which was originally created by the late Mr. Johnnie Billington, continues to educate blues musicians who help keep Clarksdale's dynamic live music scene alive. Delta Blues Museum director Shelley Ritter offers, "We are thrilled that MPB is premiering this film. MPB provided excellent radio coverage of the students' trip to Washington, so it seems fitting that From the Crossroads to the White House should first air on MPB. We are truly honored to have received this recognition for our program and grateful to the True Delta Project for helping us tell our story."

From the Crossroads to the White House is one of a series of award-winning documentaries about the legacy of the Delta blues from producers Lee Quinby and Erickson Blakney of the True Delta Project. Ms. Quinby is passionate about the Crossroads story, stating, "This film shows how commitment to music education can transform lives of young people. It's not magic, but it feels like it when you witness their growth." The acclaimed Delta Blues Museum Band will perform at the Sunflower River Blues and Gospel Festival in Clarksdale, which takes place August 8-10, 2015.

Erickson S. Blakney is a program officer with the New York-based Pinkerton Foundation. Prior to joining Pinkerton, Blakney spent nearly two decades in the media business as an award-winning writer and reporter for Bloomberg and CBS News. With a deep commitment to philanthropy and social service, Blakney and several friends organized a private "giving circle" to identify, assess and make grants to various educational, social service and human rights organizations nationwide. The private group has distributed over $3-million through the New Hampshire Charitable Foundation since 2005. He is a trustee of the DreamYard Project, along with actor Ethan Hawke. DreamYard is a Bronx-based arts and education program. Blakney serves on the board of the Lower Mississippi River Foundation, a Clarksdale-based organization devoted to protecting the Mississippi Delta and providing outdoor experiential education.

Lee Quinby, founder, Lucky Find Productions, and co-founder with Erickson Blakney of the True Delta Project, is a filmmaker and American Studies scholar and author. She received her Ph.D. from Purdue University in 1984, taught at Hobart and William Smith Colleges for 23 years, held the Gannett Chair on the Millennium at the Rochester Institute of Technology, the inaugural Zicklin Chair at Brooklyn Colleges and for six years was Distinguished Lecturer at Macaulay Honors College, CUNY until her retirement from teaching in 2014. Her first documentary, "Facing the Waves," centers on a former gang member turned surfer/entrepreneur and was an official selection at Mountainfilm Festival 2010 in Telluride, CO. Her second documentary, True Delta, co-produced with Erickson Blakney and co-directed with Daniel Cowen, screened at seven film festivals and won three awards in the short doc category. In addition to directing "Howl-N-Madd," she has directed 2 short tribute pieces: "Ladies' Man" about T-Model Ford and "Respect the Kid" on Mr. Johnnie Billington, all released in 2014.

Mississippi Public Broadcasting (MPB) provides educational and public affairs programming to Mississippians through its statewide television and radio network. MPB enhances the work of educators, students, parents and learners of all ages by providing informative programming and educational resources. MPB's locally-produced programming focuses on the people, resources and attractions that reflect Mississippi's unique culture and diverse heritage. Children's television programs constitute a major portion of the daytime and weekend morning schedules. MPB provides a valuable resource to Mississippians in disseminating information as part of the state's emergency preparedness and response system. Since 1970, MPB has won over 400 national, regional and statewide awards, including Emmy®, Edward R. Murrow and Parents' Choice® Awards. For more information on MPB, its programs, mission or educational resources, please visit www.mpbonline.org

Established in 1979 by the Carnegie Public Library Board of Trustees and re-organized as a stand-alone museum in 1999, the Delta Blues Museum is Mississippi's oldest music museum and the nation's first museum dedicated to the American art form known as the Blues. A 2013 recipient of the IMLS National Medal for Museum and Library Services--the nation's highest honor for museum and library service to the community--and a 2014 winner of the National Arts & Humanities Youth Program Award, the Delta Blues Museum is dedicated to creating a welcoming place where visitors find meaning, value and perspective by exploring the history and heritage of the unique American musical art form, the Blues. The Museum is honored to be a Great River Road Interpretive Center. 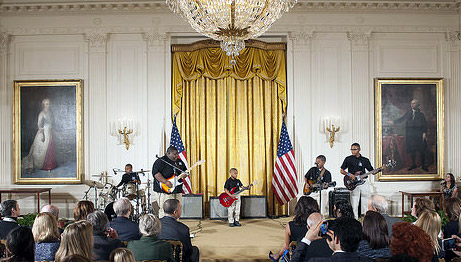