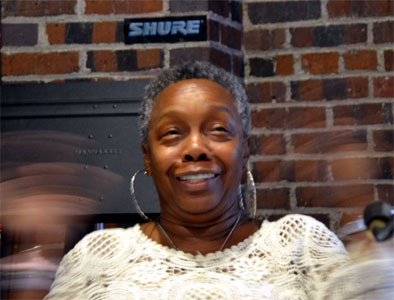 Speaking Sunday at the Delta Blues Museum's Conversation with Zakiya Hooker "during the Sunflower River Blues and Gospel Festival weekend, the daughter of "Boogie Chillen" author nailed her famous father with these remarks. But she did it with kindness and humor.

Elaborating, she talked about America's great musician giving her brother a piano, and when she asked for one of her own, he gave her a sewing machine.

As a highlight of John Lee Hooker Month at the DBM, Zakiya talked about her early childhood in Detroit when she father had a struggle providing for his large family and a struggle with his musical career.

Comparing his music to many performers today with wailing guitars and screaming voices causing ears to bleed, she said John Lee would hit one note and let it breathe rather than play fast and loud "with too much information."

"He played from the heart and from life's experiences; everybody has the blues; blues is an internal thing," she said.

She said her father was old-fashioned, got up every morning, put on a suit and tie, and always performed that way. "He believed it was a person's job to have respect" for his audience, she said.

When success arrived, she said he would bring home gifts, French perfume and silk scarves from Europe, and thoroughly enjoyed the recognition.

She said he loved recording with Bonnie Raitt who called him "her backdoor man." Asked what legacy she values most, Zakiya said, his determination, and his never-give-up attitude."