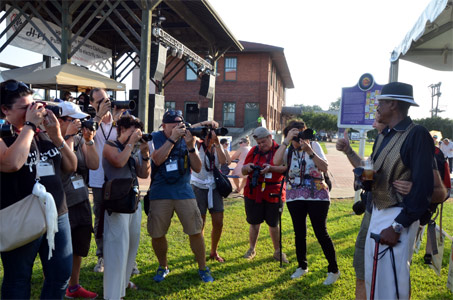 They are coming back for more with more photographers this summer. Thirteen (13) in all.

"Last years experience in Clarksdale was really amazing, so we are organizing again with another group and we'll stay in Clarksdale for the entire duration (August 10-15) of the festival," Simona Ottolenghi, tour leader said in her email request for media credentials.

Last year's group showed its photos everywhere on the web, she added.

Welcoming them this year will be three cool acoustic stages confronting the steamy daytime August temperatures they encountered last summer.

All are free and open to the public.

Performing on these stages with lively interaction and conversations expected between artists and audience are 14 musical acts starting at 10:00 a.m. Saturday and continuing through 4:45 p.m. when the main stage reopens with the Bill Abel Band at 5:00 p.m. Christine "Kingfish" Ingram picks up the pace at 6:00 p.m. followed by Terry "Big T" Williams, Vasti Jackson, Sweet Angel, and Lonnie Shields.

Sunday's Gospel Stage inside the air-conditioned Civic Auditorium begins at 4:00 p.m. with the Clarksdale Mass Choir followed by The Singing Echoes, Ned Johnson & the Jonestown Crusaders, The Myles Family, and closes with headliner: Lee Williams & The Spiritual QC's. 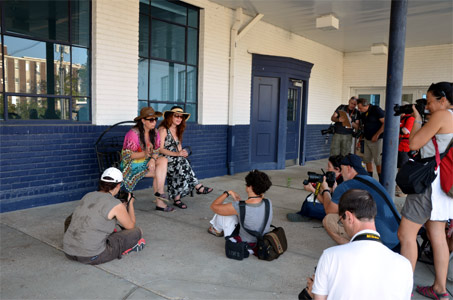 The Sunflower hosts a VIP Tent for supporters who purchase weekend tickets to enjoy seating at linen-covered tables with unlimited beverages beneath an air-cooled tent near the main stage. For more information, telephone (662) 627-5301.

For updates and a complete lineup, view the festival's website: www.sunflowerfest.org

The Sunflower Festival has been heralded by USA Weekend as one of America's Top 10 Places to hear authentic music. In 2012 it was honored with its own Mississippi Blues Heritage marker, and Visit South has named it Mississippi's Top Pick of blues festivals in 2016.

The festival is staged entirely by volunteers who work year-round raising funds to keep the event free and open to the public. Members are 50 percent African American and 50 percent Caucasian and range from professionals including lawyers, doctors, teachers, and accountants to secretaries, road crew workers, cooks, retirees, and a prison guard from Parchman.

The non-profit 501c3 organization has been supported by grants from the Mississippi Arts Commission since it was inaugurated. It is funded also by HPI, Coahoma Community College, Merit Health, Clarksdale Public Utilities, local banks, businesses, individuals, and memberships.