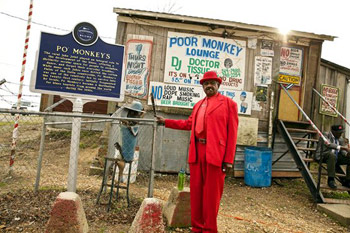 Willie "Po' Monkey" Seaberry has passed away at his home in Merigold, MS at the age of 74.

Throughout the years Willie, a lifelong sharecropper, would open his home on Thursday nights to those that wanted to dance, converse and listen to the blues or on rare occassions even take in a live band. Po' Monkeys, one of the last remaining juke joints, is known for it's colorful painted signage dotting the landscape of Willie's home.

Willie would change from farmer to club owner and don any number of colorful suits in the course of the evening. Sometimes you could even catch him wearing a floor length red, white and blue wig. He would often state that people would think something was wrong if he wasn't out there acting like a clown.

Willie was nicknamed "Po' Monkey" when still a child, and as he grew older he was known to have an infectious smile and time to talk. With a deep love of blues music, it was only natural that Willie would open his home in the grand tradition of Delta house parties.

For more than 50 years Po' Monkeys has been an icon in the Delta and known as an integral piece of in the development of the blues. One of the last remaining rural juke joints (a single home out in the middle of a field), Po' Monkeys was dedicated as a stop on the Mississippi Blues Trail in 2009.