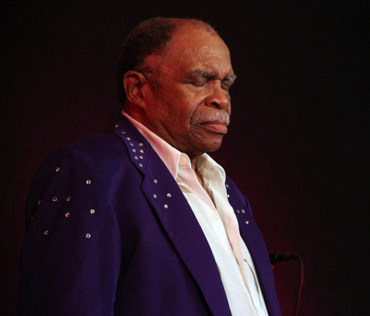 It with the saddest tears that we remember the life of Otis Clay. Born in Waxhaw, Mississippi, in 1942, Clay followed the Great Migration north first to Muncie, Indiana in 1953, and ultimately Chicago in 1956. It was there he joined many of the city's Gospel groups until he began his secular singing career in 1962. Clay signed with One-derful! Records and recorded "A Flame In Your Heart" in 1965.

After a stint with Cotillion Records, Clay landed in Memphis with Hi Records from 1971-74 and with Willie Mitchell at the helm, recorded that label's most iconic soul tunes. His biggest hit, "Trying To Live My Life Without You," was followed with Clay classics, "If I Could Reach Out" and "I Die A Little Each Day." Clay moved to many other labels including Rounder, Blind Pig, CrossCut, Catfood, Echo, and others.

Throughout the years, he has been a featured vocalist on many records from the Bo-Keys, Johnny Rawls, Magic Slim, Eddy Clearwater, Billy Price, Tad Robinson, Rico McFarland, and Dave Specter. In 2013, Otis Clay was inducted into the Blues Hall Of Fame.

Nobody grabbed an audience or individual like Otis. Off the stage, Clay was the absolute gentleman. He listened to all with the same heart and soul that he delivered his songs. Once touched by this man, a lifelong friendship would ensue. We will certainly cry a little each day with this giant taken away.

Otis Clay, a hall of fame soul legend and longtime Billy Price collaborator, died Friday at age 73 of a heart attack in his hometown of Chicago.

In May, the singers planned to be in Memphis, where they are nominated at the 37th annual Blues Music Awards for best soul blues album for 2015's widely acclaimed "This Time For Real." 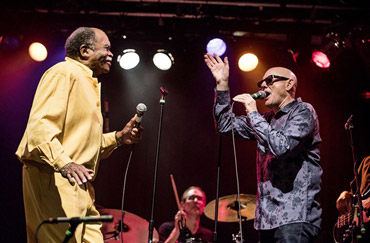 Otis Clay and Billy Price at the Rex in September
Photo by: David Aschkenas and Courtesy of post-gazette.com

"After the shock of this wore off a little, I was left with a feeling of gratitude to have known him," Mr. Price said Saturday. "I had the opportunity to sing with him and to learn from one of the true masters of the genre I work in. We first sang together in 1983, and I have so many memories of the great shows we did together over the years."

Mr. Clay, a 2013 inductee to the Blues Hall of Fame, grew up in the '40s in the small Mississippi town of Waxhaw, singing in church and hearing blues and soul on the radio.

In 1972, he moved to Hi Records (home of Al Green) and released "Trying to Live My Life Without You," produced by Willie Mitchell, the man behind the Green hits. The song later became a No. 5 hit for Bob Seger.

Those early albums made him a popular touring attraction in Europe and Japan, where he recorded a number of live albums. He was also nominated for a Grammy for Best Traditional R&B Vocal Performance.

In recent years, he recorded for Bullseye Blues and he recorded a gospel album in 2007 called "Walk a Mile in My Shoes."

Mr. Clay had a huge influence on Mr. Price, who used the Clay song "Is It Over?" as the title track of its 1981 debut. He reached out to the Chicago singer, who came to Pittsburgh during that era to join Billy Price and the Keystone Rhythm Band for shows in Washington, D.C. and McKees Rocks.

They continued to perform together over the years and did a duet of "That's How It Is" on Mr. Price's 1997 album, "The Soul Collection," and a cover of "Love and Happiness" on his 2009 album, "Night Work."

Ronny "Moondog" Esser, who owns the club Moondog's and runs the Pittsburgh Blues Festival, recalls a Clay-Price show at the Decade in Oakland on March 8, 1992 with two Hollywood dignitaries in the crowd: Jack Nicholson and Danny DeVito, who were filming "Hoffa" here. Price said at the time it was the first time he felt nervous on stage.

In the summer of 2014, the two singers recorded vocals in Chicago for their first full-length collaborative album, "This Time for Real."

"There were so many twists and turns with that album, and lots of times when it seemed like it wasn't going to happen," Price said. "So I'm glad to not be full of regret over something that might have happened but didn't."

To celebrate the release, they performed a show together in September at the Rex Theater that was captured on video by filmmaker Tony Buba.

Mr. Price said of Mr. Clay, "In addition to being the great artist that he was, he was just a beautiful, warm, open-hearted soul who touched everyone he came in contact with. It's hard to believe he is gone."

"He was a true gentleman of the blues," Mr. Esser said. "He was always so cool and friendly and just grateful to have the attention - almost seeming like he didn't deserve it. So many musicians feel entitled or under-appreciated. He was the exact opposite."

To view this article and related photos, please visit: www.post-gazette.com.