Bringing Back a Good One - LeRoy Falconi, Jr., AKA "The Blues Dog" 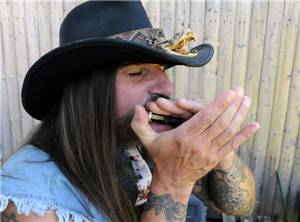 Falconi's work has taken him across the country, especially the South and Clarksdale, Miss., the crossroads and the home of the Delta Blues Museum.

The Ambassador of the Blues - LeRoy Falconi, Jr.

Montville has its share of aspiring musicians aiming to hit the big time. Plus, one blues harmonica player who has made it into the Blues Hall of Fame.

LeRoy Falconi Jr., also known as the Bluesdog, has played harmonica with some of the greats of blues and other genres. The list of bands he's played with is as eclectic as it is impressive, from Devon Allman (Greg's son) and Honeytribe, Lucky Peterson, and Buckwheat Zydeco to James Montgomery, Jerry Rosen, Taj Mahal, and the Tower of Power. For three years, he was the East Coast harmonica player for Shirley King, BB King's daughter.

Falconi, 44, has been moving around in blues circles for years. He started out with the goal to some day meet BB King. He's jammed with Bo Diddley, who labeled him "the known unknown" for being a solid "harp," or harmonica, player whom musicians and bands know to call.

Through his music and hobby of collecting musical memorabilia, he's met many of the live performing musical greats. He considers Sugar Blue, the harmonica player for the Rolling Stones, a friend. The numbers programmed into his cell phone and e-mail address list would make music groupies swoon.

In September, the Blues Hall of Fame recognized Falconi as a Master Harmonica Player. He also was named an official Ambassador of the Blues to Connecticut, an honor he takes seriously as a commitment to spread the music.

By being the musician's musician, Falconi might be recognized more walking Nashville's streets than New London's. But he's still a hometown boy. Born in New London, he spent his first years in Montville and then grew up in Quaker Hill. He learned how to play from his father, Leroy Sr., who went by "Ramblin Roy Friend," somewhat of a country legend with the "Cousin Johnny Country Show," a radio and traveling show.

Falconi grew up surrounded by a mix of popular music. His father played Hank Williams, Conway Twitty, and Charlie McCoy; his mother, Kathaleen, loved Donna Summer; the tastes of sisters LeeAnn and Toni ranged from the Ramones to Journey and from the Grateful Dead to Rod Stewart. Leroy cranked up Led Zeppelin and Pink Floyd.

"I didn't realize that Led Zeppelin was playing all these old blues numbers in their style," he said.

Although his mother has passed away, his dad, age 73, still lives in Quaker Hill.

Falconi said he started dabbling with the harmonica when he was 14 years old. He performed with cousins back behind his Uncle Al's Corners Edge sandwich shop in Waterford.

He credits a former Waterford school teacher, Mrs. Stidfole, for inspiring him.

"She said music was an inner expression. It's your music, so don't let anyone ever tell you that you're doing it wrong," he said. "She's a wonderful person."

He graduated in 1982. After months of playing along with his collection of music, only for himself to hear, he concluded he sounded just as good, if not better, than people he was paying to hear play at clubs. Local gigs and music festivals led to larger events and venues. People in the industry heard him play, and his name got around.

Falconi describes himself as a blues harmonica player with a multifaceted contemporary twist. He crosses genres from gospel and blues to reggae and funk.

He said a buzz started around his playing style and abilities in the 1980s. Part of his reputation is the ability to improvise with a band. Another is his passion for the music.

Falconi's work has taken him across the country, especially the South and Clarksdale, Miss., the crossroads and the home of the Delta Blues Museum.

"It's pretty intense," he said. "You're surrounded by people who at first you heard about, then you'd seen them play. Then you got to meet them. Now you're playing music with them."

Falconi cuts a colorful figure on stage: long hair, flowing mustache and goatee, tattoos. He usually wears bib overalls, which, he said, represent the roots of the music, and a shirt and a tie, out of respect for all the musicians who have gone before him.

Then there is the black cowboy hat decked out with a stuffed rattlesnake, fanged mouth wide open.

"The hat is just class," laughed Falconi. He's been through several; the original hat is on display at the Delta Blues Museum.

Someone dubbed him "the Bluesdog" some years back at a gig in New Haven. He astutely copyrighted the name and blue hotdog logo, as well as the "Famous Since Day 1" tagline. He's a one-man marketing machine, selling or giving away signature blue bumper stickers, T-shirts, and Frisbees.

Being a blues harmonica player is hardly a lucrative career, unless you're Charlie McCoy, or the next Charlie McCoy.

"There's no one CD that I'm on," Falconi said. He's a background musician on many CDs and video clips of recognized artists, though.

The future could hold playing music for big-name advertisers, becoming the recognized musical bed behind a jingle. He's in discussions with at least one national food and beverage brand.

In addition, Falconi, a certified cabinet-maker, has created what he calls the world's most unique blues collage. With more than 100 harmonicas and other music memorabilia, signed by 126 talented and famous musicians, it's no doubt the largest collection of autographed harmonicas.

The collection is mounted on a 3-by-6 mahogany board, part of an intricate design of musical memorabilia Falconi has collected over 20 years. Strips of wood form frames around groupings of the harps, and symbolically tie them together.

It started when Falconi realized he was blowing through a lot of harmonicas and couldn't fix them.

"They sounded worse after I tried to repair them," he admitted. He started asking the musicians who had helped shape his sound to autograph them. Some were famous artists: Bo Diddley, Johnny Winter, Greg Allman, Billy Cox, Jaimoe, Jon Coleman, and Chubby Checker, to name a few. Each time he met the artist and got a signature, he snapped a photo.

Over the years, moving around, he continued to tuck away the signed harmonicas. He didn't know what he'd make some day, but he promised each musician they would get something from him.

Falconi designed the large piece of art, building nine secrets into it, so it couldn't be duplicated, and told each of the artists represented on it one of the secrets. His dream is that one day enough of them could meet up, compare secrets, and piece together all nine. It also would be one heck of a jam session if they brought their instruments.

Falconi's finished piece is on display for the next year at the Delta Blues Museum in Mississippi. He also made a poster of it, running 3,000 copies, 500 of which are part of the special edition series.

He is presenting signed copies of the poster to the 126 musicians whose signatures appear on the original piece, as well as other performing artists. On Thursday, he will present BB King, the center of the piece, with his collectors' edition print.

Copies of the posters, signed or unsigned, can be purchased from his Web site.

Through all of this, Falconi remains very down home. He doesn't feel that he's "made the big time," or had that "one big break" yet.

"I've never said â€˜I'm really doing it,'" he said. "I'm happy. There is no big break. You're just as nervous at one performance as the other. I'm just fortunate to know everyone who's on this art piece."

Although he knows his way around Nashville and other musical cities, Falconi has always returned to Montville and Connecticut.

"It's still one of the most beautiful places," he said. "It's home."

The casinos are bringing more music to the area, too. Falconi has played with the Mohegan All Stars who perform at the Mohegan Sun Wolf Den.

"That's some of the cream of the crop, the best of the best musicians," he said. "It's an honor and a half to be asked to play with them."

Falconi has five children. He and his wife, Amanda, and 14-year-old daughter, Elina, live in Oakdale. Amanda is from Salem and her family is heavily into bluegrass. Her mother, Linda Turner, plays the standup bass, mandolin, and guitar.