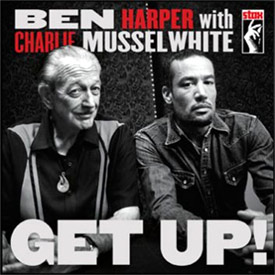 Ben & Charlie are in the news again - this time the Montreal Gazzette has compiled an article with video and images from the 2014 Montreal Jazz Festival. Read More

Ben Harper and Charlie Musselwhite have garnered a lot of press with their CD "Get Up". Not only have they won the 2014 Grammy Award for Best Blues Album; they also had a nomination in the Best Music Film category for their film "I'm In I'm Out And I'm Gone: The Making Of Get Up!".

In 2013 they performed on The Tonight Show with Jay Leno. Ben and Charlie have also appeared on the cover of Downbeat magazine, received a photo op in Rolling Stone magazine, and an article on PopMatters.com.

Downbeat Magazine
"[Harper] has delivered something from the heart," hails DownBeat's March cover story on Ben Harper w/ Charlie Musselwhite's new album, 'Get Up!,' on stands now. Go here to read all about the making of 'Get Up!,' which they say is the "gleaming, soulful result" of a 15-year friendship that started with a session with John Lee Hooker:
Read More

This "Don't Look Twice" performance is featured on the "I'm In I'm Out And I'm Gone: The Making of Get Up!" DVD directed by Danny Clinch, and the special indie retail 7" vinyl single 'Machine Shop Sessions.' Watch Video 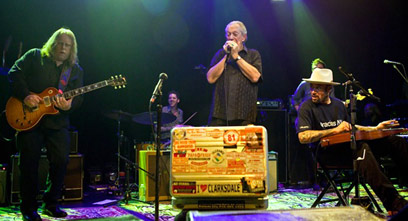