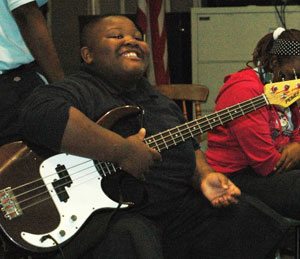 "Hey, look at you," said the ornery museum manager-clerk-handyman behind the front desk "This is the first time I've seen you come in on time all year."

It's 3 p.m. on a Monday at the Delta Blues Museum in Clarksdale, Miss., and students are trickling in for the Delta Blues Arts and Education Program. They're all greeted with friendly mock sarcasm by the crew-cut wearing, tough-talking desk manager - only the regulars know he's accomplished blues harmonica player Bob Kimbrough. The students make their way to a studio room in the back for their semiweekly blues music lesson, part of a program that was launched in 1986 to preserve this seminal form of music in what arguably is the epicenter of the hallowed genre. But the kid who ambled in wearing an orange T-shirt with "Chrst" on the front a biblical verse on the back, isn't a student after all - he's one of the teachers, Travis Calvin, is a 19-year-old blues prodigy who won a summer scholarship to the Berklee College of Music two years ago.

Calvin laughs at the manager's gruff greeting. "Yeah, I know," he shrugs, speaking with the soothing, laid-back drawl heard throughout the Mississippi Delta. He's upbeat, displaying a touch of teenage excitement that contrasts with the demeanor of the slightly older instructor Rich Crisman, whose YouTube video - under the name "DaddyRichIsPoor" - includes an extended blues jam he played with his band at Ground Zero Blues Club, a Clarksdale blues joint. Ground Zero is co-owned by actor Morgan Freeman, a Delta native from Memphis and perhaps the most well-known preservationist of the culture. 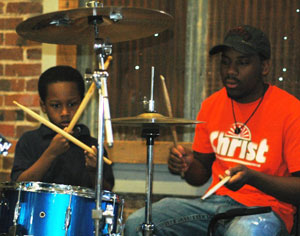 Calvin, the first one to arrive, clocks in behind the counter, tapping out beats and killing time before everyone else shows up.

"I grew up in a bad neighborhood, and my mom just wanted to find something for me to do," Calvin says, explaining how he got involved in the museum's blues class. He's played guitar since he was eight and wants to open up a music school in Clarksdale after he's spent some time touring as a professional musician.

Calvin's story isn't unusual. Most of the parents of the small group of six (ranging from grade-schoolers to teen-agers to one 60-year-old woman) use the class as a makeshift after-school center. Kerry, 7, is dropped off by his mother Teresa.

"He's always playing the drums," she says, happily recalling the time she had to buy a new trash can because Kerry beat it to death with his drumsticks. "I'm really busy, and this way they come home at five o'clock all excited. That's all they want to know - 'Is it class today?'" Teresa also brings her 10-year-old sister daughter Keana to the class, as well as Kerry's friend Robert, also seven.

Whatever reasons parents might have for shepherding kids into this rich musical tradition, it serves as a cultural bloodline for this region's greatest gift to the world. The blues was not only birthed here in the Delta, but the sound ultimately gave rise to rock-and-roll, blues rock, the British invasion and endless mutations of popular music that followed. There is concern that blues is becoming a lost, or at least struggling, art form in these parts, but that notion is really more a reflection of the region's struggles in general. Poverty is rampant, and many of the downtown main streets of blues incubators such as Clarksdale, Cleveland, Greenwood, Greenville and Indianola are boarded up and half-abandoned. 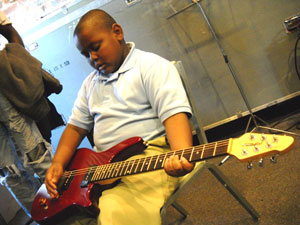 But despite economic hardships and a generation of youngsters who would rather write rap songs than blues licks, people like Travis Calvin are doing their best to carry the torch for Delta legends who started the blues sound decades ago, using the informal master-pupil apprenticeship system that gave rise to such greats as such as Robert Johnson, Son House and Muddy Waters.

For example, down the road in Indianola blues guitarist Jerry Fair - who fronts the band Jerry Fair and the Mississippi Blues Crew - teaches a guitar class at the B.B. King museum on Wednesday nights. In Baptist Town, a small impoverished stretch of shotgun shacks, just outside of Greenwood, nearly all the young people listen to rap music, according to convenience store owner, tour guide and cultural preservationist Sylvester Hoover. But in this town where Robert Johnson played his last gig and then died after being poisoned, Hoover has seen a few of teen-agers mix the blues sound into their hip-hop, creating a hybrid he calls "blues rap."

"It's in their DNA," Hoover said. "Even if they don't realize it, it's part of their heritage."

And so it is in Clarksdale on this Monday night at the Blues Museum, as the students take up their instruments and begin strumming and banging out the blues.

What sounds like an extended instrument tuning session has actually been the first 10 minutes of class, as teachers work with students individually, giving them tips as they play on drums, guitar and bass. Crisman directs Kerry on drums from his bass guitar and cracks jokes into the microphone that produce shrieks and giggles from the kids every time.

This is a mellow day, says Bonnie Renkel, 60. Last week, more kids were here and were running around, banging their drum sticks on everything in the room.

Calvin and Crisman both agree that the advanced class which meets on Wednesdays and Thursdays is a big easier and, for them, more fun.

"The beginning class is kind of a headache. But the headaches are worth it," he says with a sleepy smile.

Somehow the cacophonous sounds magically unify every now and then, and the one-on-one jam sessions melt into one song as the students naturally pick up on each other's looping chord progressions. Crisman is always at the mic, singing and playing guitar, while Calvin hops around on drums, piano and bass.

Christone, 10, follows along with Crisman as he plays a chord progression. As Crisman breaks out into fast improvisation, Christone mimics him, moving his fingers quickly along the neck of the guitar and throwing his head back.

"I just wanted to learn how to play the guitar," says Christone. "People say it's hard, but I like it." Loyola's journalism instructor Mike Perlstein and 12 of his students are spending a week in the Mississippi Delta searching for the home of the blues. Click below to read past blogs from the road...