CLARKSDALE ‐ The hometown of gospel/soul celebrity Sam Cooke is gearing up to host musicians of similar international ranking when the Blind Boys of Alabama and the Preservation Hall Jazz Band perform Friday, April 24, here at Coahoma Community College.

However, admission to the Pinnacle unlike venues that usually host the multiple Grammy winners including Carnegie Hall and Lincoln Center, is free thanks to CCC's Lyceum series, Mississippi Festival, and the Rock River Foundation. 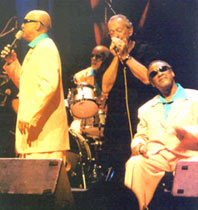 Not only have the Blind Boys been legendary artists performing gospel music "that reaches the heart" for 60 years, they also take on songs by Eric Clapton, and have hooked up with Tom Waits, Charlie Musselwhite, Mavis Staples, and George Clinton.

One reviewer says what makes the Blind Boys different from most gospel groups is its ability to cross over into the mainstream audiences.

At the Gertrude Ford Center in Oxford several years ago, the audience gasped and then applauded when Charlie Musselwhite was introduced on stage by the Blind Boys with the statement:

" Charlie is an old friend; he is facing emergency eye surgery in Memphis tomorrow, and we've assured him he can join us if things don't work out."

Musselwhite's surgery was a success, and he's performed with them many other times including this "Down by the Riverside" tour. 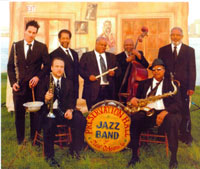 On April 24 Musselwhite, who lives in California, will be in the Clarksdale area, but he is being honored with the dedication of a Blues Trail Marker in Kosciusko, his birthplace.

The collaborative "Down by the Riverside" tour of the Blind Boys and the Preservation Hall Jazz Band kicked off Sept. 16, 2008, to bring attention to the rich musical heritage of New Orleans and the city's revitalization efforts to continue rebuilding following Hurricane Katrina.

Rave reviews from Rolling Stone and the Washington Post have praised their album, " Down in New Orleans," released Jan. 29, 2008, with guest performances by Allen Toussaint and the Preservation Jazz Band.

Founded in 1939 by Clarence Fountain, Jimmy Carter, and George Scott who met at the Alabama Institute for the Negro Blind, the group has won four consecutive Grammy Awards.

Interviewed several years ago, Fountain said he believed their inability to see improved them musically.

" When God takes one thing from you, he gives you something better," he said. "Look at Ray Charles, who was one of the greatest ever. You can see more into it than the average sighted guy."

Fountain said the group never got into the music profession to make money but "to sing and spread the message of the Lord."

The Blind Boys have been featured on "60 Minutes," "Regis and Kelly," "The Tonight Show," "The Late Show with David Letterman," appeared on the 2005 Grammy Awards telecast, and the 2003 movie "The Fighting Temptations" with Beyonce and Cuba Gooding Jr.

Many of the band's charter members performed with the pioneers who invented jazz in the early 20th century including Buddy Bolden, Jelly Roll Morten, Louis Armstrong, and Bunk Johnson.

In April the Blind Boys and Preservation Hall performed together along with special guests Dr. John, Susan Tedeschi, and others at a sold-out concert at Tipitanas in New Oreleans. The show was recorded for a DVD due soon to be released.

Also featured in concert with the Blind Boys of Alabama at Coahoma Community College April 24 will be the Preservation Hall Jazz Band of New Orleans.