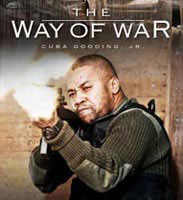 Way of War Movie stars Cuba Gooding, Jr. and features Bill Howl-N- Madd Perry performing the part of a Washington D.C. Night Club Owner. Perry performs in several scenes with Gooding and performs his original music. Paramilitary operative David Wolfe (Cuba Gooding Jr.) is a highly trained and deadly assassin assigned to kill a notorious terrorist in the Middle East. During his mission, he stumbles upon a US government conspiracy involving the top members of the administration. Now on the run, David is determined to expose the truth before it's too late.

The Music Showcase will feature Bill Howl-N-Madd and his Blues Band and Dr. Alphonso Sanders and guest musicians.

Dr. Alphonso Sanders has been involved in music education for over 25 years as an educator, clinician, adjudicator, and performer. He is presently the Chair of Fine Arts and Director of the BB King Recording Studio at Mississippi Valley State University. Dr. Sanders has also performed at many recognized festivals including the North Sea Jazz Festival, Den Hague, Netherlands; the Montreux Jazz Festival, Montreux, Switzerland; the Lucerne Blues Festival, Lucerne, Switzerland; the Mobile Jazz Festival; many Delta Blues Festivals and the 1996 Summer Olympic entertainment festivities at Central Park, Atlanta, GA. As a Fulbright Scholar, Dr. Sanders studied in China visiting 12 major cities, exploring the culture of Chinese music and visual arts. His recent recording project is titled "Mississippi Influences".

Bill Howl-N-Madd Perry has been playing his music for over forty years in festivals and in clubs all over the US and internationally. Bill and his band won the Indianola Blues Society's 2005 Blues Challenge and performed at the 22nd Annual International Blues Challenge. Bill is a member of the Central Mississippi Blues Society in Jackson, MS, and the Mississippi Blues Society of Indianola in Indianola, MS. He has performed in numerous Mississippi festivals including the Sunflower River Blues and Gospel Festival (Clarksdale), the Highway 61 Festival (Leland), and the B.B. King Festival (Indianola).. He has been featured in Blues & Rhythm, IL Blues, and Blues Revue.

Howl-N-Madd is an instructor in the Delta Blues Museum in Clarksdale, Mississippi's Museum's Arts and Education Program. Bill has also worked with B.B. King in the B.B. King Music workshop at Mississippi Valley State University and programs presented by Dr. Alphonso Sanders.

Bill Perry writes and performs his own music. His CD's are featured on XM radio Blues Picks to Click. He has written for Lil Johnny Taylor, Ted Taylor, and Cash McCall, and for Stan Lewis. He wrote for J.J. Taylor on a Willie Dixon Label and worked as a studio musician for Phil Chess.