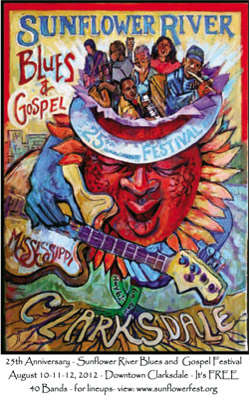 CLARKSDALE ‐ Multiple headliners including an internationally-renowned superstar booked to perform at the Sunflower River Blues and Gospel Festival's 25th anniversary this summer will be announced Friday, March 2, at Ground Zero Blues Club, according to festival co-chairman.

"This is exciting news that promises a spectacular celebration for Clarksdale and Mississippi, and far beyond," says longtime festival co-chairman Melville Tillis.

"We invite our friends, supporters, blues fans, and media to join us from 6 ‐ 8 p.m. to hear more about it," continues Tillis.

Scheduled for the Aug. 10-11-12 weekend, the festival will remain free and is expected to attract additional thousands of visitors beyond last year's 25,000 attendance.

Sunflower anniversary t-shirts in multiple colors, caps, posters, and other souvenirs featuring Barnard's design will be displayed at Ground Zero as well as sign-up sheets for volunteers.

Keyboard artist Marco Stewart will be providing music for the announcement gathering, and Jimbo Mathus will be performing afterward.

The first Sunflower Festival took place in 1988 with headliners Otis Rush and James Son Thomas performing the finale in the Larry Thompson Center.

Others musicians playing on the Sunflower River stage beneath the Riverside Recreation Center and also a flatbed truck near the Stackhouse/Rooster Records were Jessie Mae Hemphill, Jack Owens and Bud Spires, the Jelly Roll Kings: Big Jack Johnson, Frank Frost, and Sam Carr, Boogaloo Ames, and others.

For 25 years Othar Turner's Rising Star Fife and Drum Corp now led by his granddaughter, Shardee Turner, has kicked off a procession from the acoustic stage to open the main stage.

Festival merchandise and VIP tickets will be available also through the website.