Multiple Celebrities to Perform Include Charlie Musselwhite and Bobby Rush

CLARKSDALE - When the Sunflower River Blues and Gospel Festival celebrates its 25th anniversary in 2012 with a tribute to its hometown music legends, multiple celebrities and one of the world's most famous musicians ‐ Robert Plant - will be headlining the celebration.

The Led Zeppelin vocalist, solo virtuoso, and winner of five 2007 Grammy Awards for "Raising Sand" with Alison Kraus and 2011 Americana Roots Album of the Year winner for Band of Joy with Grammy winner Patty Griffin will be in Clarksdale August 10-11-12, 2012, with an entourage of 10 to perform at the Sunflower. 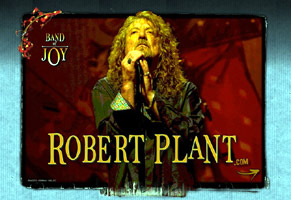 Robert Plant on the cover for Band of Joy,
his latest album that won the
2011 Americana Root Music Award. 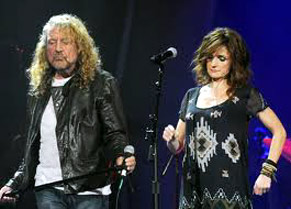 "This is spectacular news," says Melville Tillis, longtime festival co-chairman. "We have been in dialogue with Robert Plant for several months, and are thrilled he will be here."

Tillis says that for more than a year, festival organizers have been planning a special anniversary weekend.

The news was announced over the weekend at a media announcement party at Ground Zero Blues Club of Clarksdale. 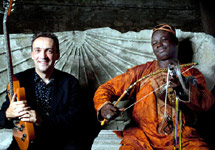 Other celebrities booked for the festival are multiple Grammy nominee Charlie Musselwhite, winner of more than 27 Blues Music Awards and Entertainer of the Year favorite Bobby Rush.

Both Musselwhite and Rush have headlined the festival several times during its 25-year history, and more than 40 bands will be performing during the three-day event.

Plant, a blues historian, who recorded the album "Walking Into Clarksdale" with Jimmy Page in 1999, has visited Clarksdale numerous times, and personally funded Mississippi Heritage Blues Trail Marker unveiled on Thanksgiving Eve 2009 honoring Tutwiler as the Birthplace of Blues.

He also presented the Delta Blues Museum with a custom-designed plaque composed of miniature Led Zeppelin album covers and an engraved tribute to Delta blues musicians who influenced the famous rock band. 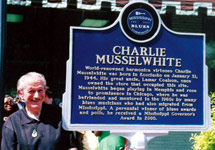 Multiple Grammy nominee
Charlie Musselwhite, at
the dedication of his Blues
Trail Marker

The first Sunflower River Blues and Gospel Festival was held in 1988 with three stages: on the banks of the Sunflower River beneath the Riverside Recreation Center; the open space between Delta and Sunflower Avenues; and inside the Thompson Center.

Staged entirely by volunteers, the festival has been free and open to the public since it was established. It has many patrons and partnerships including the Mississippi Arts Commission, the Rock River Foundation, the Delta Blues Museum, the Coahoma County Tourism Commission, Coahoma Community College, Northwest Mississippi Regional Medical Center, 305 Spin Webmasters, and others.

The festival enjoys an official sister-city relationship with the International Notodden Festival in Norway that was established in 1996.